There are celebrities and there is Richard Branson. Reputedly owned by Richard Branson, but no-one is really sure! It is, however, no doubt owned by someone extremely wealthy!

The flamboyant entrepreneur is best known for Virgin Airlines and Virgin Records reputedly owns Villa La Cassinella sharing the “ Punta di Lavedo” peninsula with Villa Balbianello. This fabulous estate has been extensively renovated and completed in 2008.

Built at the end of the 19th century, the original owners were the Comasco industrialist family who created magnificent gardens around the property. There is a stunning 3 hectares of cypress trees, boxwood hedges, vines of wisteria and jasmine, flowering dogwoods, azaleas, plus tree peonies and roses.

This villa can only be accessed by boat or helicopter. There is a central courtyard, an upper terrace, a teak-decked infinity pool, lined in glass tiles, a tennis court, home cinema and magnificent Lake views. The “News of the World Newspaper” quoted: “Remember the scene in Casino Royale where James Bond chills out after surviving a spot of eye-watering torture by Le Chiffre? The one where 007 nurses his cuts and bruises in a luxurious sun-drenched garden cascading down to a spectacular stretch of water surrounded by towering mountains?

Ever wondered where that stunning backdrop to Daniel Craig’s R&R was? The 18th century Villa Balbianello hosted Mr. Craig and his Hollywood crew. The mansion sits on a spit of land jutting into the deep green waters of the Lake whose shores are lined with holiday homes of some of the world’s mega-rich.

Richard Branson has a villa on the same peninsula as Balbianello. David Beckham was given board and lodgings by Sir Richard while he ‘wowed’ them at AC Milan. And George Clooney is often seen driving to and from his humble shack.”

George Clooney is responsible for many thousands of words of print about Lake Como and highlighting the wonders of this spectacular location. He purchased his Villa, Villa L’Oleandra, in 2001, in the small community of Laglio. In fact, it has become such a popular tourist haunt that Giorgio Possi, the mayor of Laglio, introduced a fine, forbidding group of more than three to gather outside of Villa Oleandra. The fine starts at €19, but rises for repeat offenders!

The villa itself is 18th century, was previously owned by the Heinz family and sits on the waters edge within private grounds. The villa is reputed to have cost $7m and needed a lot of restorative work. So, Mr Clooney also bought the nearby Villa Margherita which was immediately habitable.

George Clooney, who normally stays at his villa up to four months of the year, can be seen when in residence, riding his motorcycle around Lake Como and on boats of varying descriptions visiting local towns and restaurants around the Lake.

George of course, has celebrity friends and many of these have been to the Lake and some are rumoured to be looking for their own villa on Lake Como. 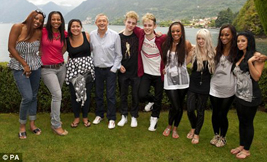 A few years ago Louie Walsh choosing his final three groups for the X-Factor TV program. Richard Branson’s magnificent villa was the backdrop for the selection process where he was also joined by Ronan Keating. The lead singer of Muse, Matt Bellamy has had a home and recording studio near Lake Como since 2006. Bellamy chose this idyllic Italian location not just for the scenery but also for its musical past. A lover of classical composers, his house is said to be near to Villa Herker Hocevari & Villa Passalacqua in Moltrasio, where Vincenzo Bellini, a celebrated 19th-century opera composer, spent several years. Bellamy has commented, “When I’m in playing the piano, I know I’m in the same place where a couple of hundred years ago some great music was being written.”

Gianni Versace’s Lakeside villa in Moltrasio was reputedly sold for about $52 million in 2008, ($5-6m over the asking price) to a Russian multi-millionaire; Arkady Novikov, a “flamboyant” restaurateur affectionately (known as the “Blini Baron).”

The Villa itself “Le Fontanelle” was originally built in 1776 and owned prior to Versace by the Cambiaghi family. Versace purchased this magnificent villa in 1977 and completely refurbished the property ay huge expense. He restored the elegant neo-classic style true to their original design and Versace supervised every element of the restoration and furnished the villa personally.

The grounds and garden restoration however was left to Sir Roy Strong, a respected and honoured “landscaper and garden designer”. The Lake Como villa was Versace’s favourite place and was often in residence and the villa was often used for celebrity parties.